Actor James Hong, 93, finally gets his star on Hollywood’s Walk Of Fame

James Hong, the ubiquitous veteran character actor who found a champion in Lost star Daniel Dae Kim, accepted his fan-funded star on Hollywood’s Walk Of Fame in a burst of drums, cymbals and Chinese lion dancers — all harbingers of joy and good fortune.

“I’m here! I’m alive!,” the energetic 93-year-old said Tuesday (May 10) as he accepted the 2,723rd star on the Walk of Fame, located between Madame Tussaud’s Wax Museum and the TCL Chinese Theater. And Hong just made history as the oldest person ever to receive a star on the Walk Of Fame.

Noting that he had no speech planned, “because I’m not that kind of person,” Hong said he preferred to enjoy seeing familiar faces and take in the moment as it happened.

His speech came after he had joked and improvised bits around the speeches of those who introduced him, including Kim, Everything Everywhere All At Once co-star Jamie Lee Curtis and Councilmember Mitch O’Farrell, the last of whom granted him an elaborate, hand-lettered proclamation from the City of Los Angeles.

The lion dancers and musicians stepped on Hong’s words a bit, but that didn’t discourage the actor from hustling over to where the dance was taking place and adding a few traditional and nontraditional dance steps himself amid the drums and cymbals. Hong then invited friends and presenters over to dance with him as well, seeming to fully enjoy his moment in the bright LA sun.

Hong, who is Chinese American, was born in Minnesota and served stateside in the US Army during the Korean War. He joins fellow performers of Asian descent including Anna May Wong, Mako, Bruce Lee, Jackie Chan and Lucy Liu on the Walk Of Fame. 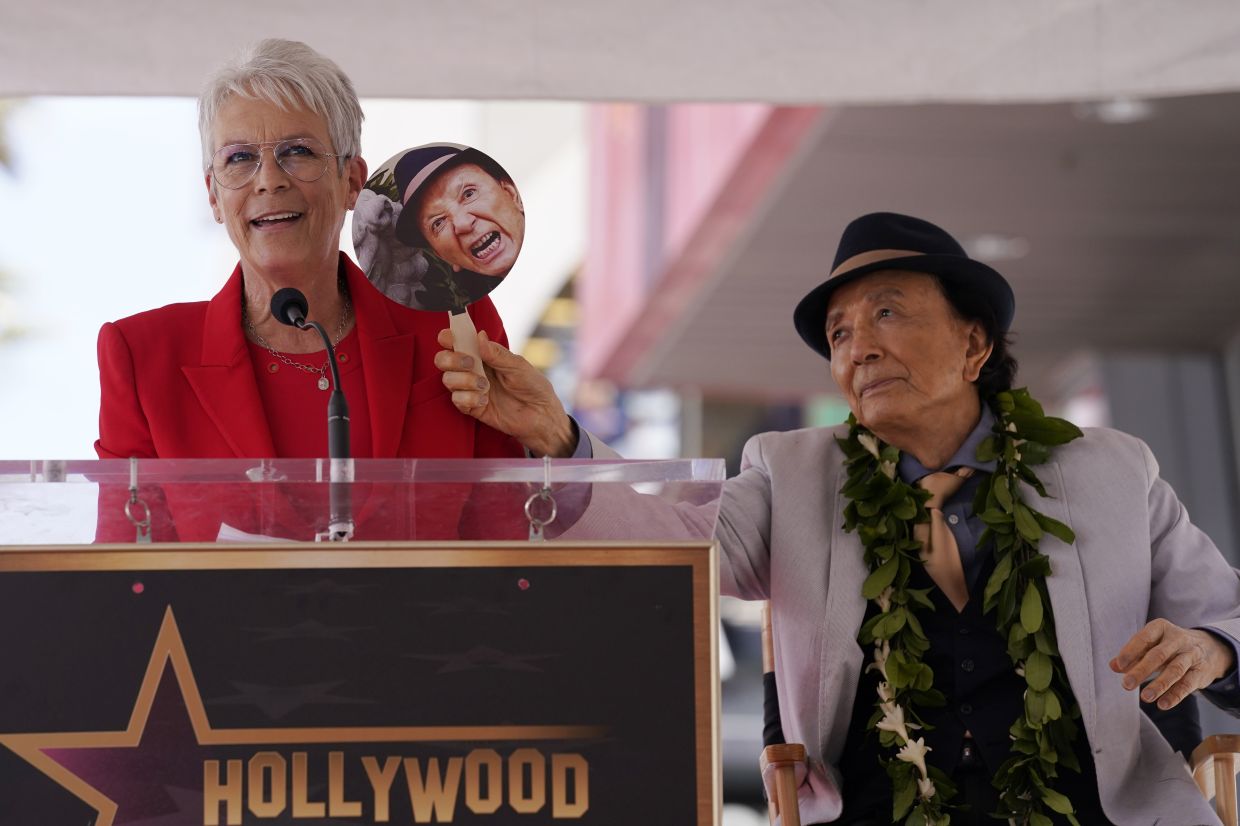 James Hong stars alongside Jamie Lee Curtis in ‘Everything Everywhere All At Once’. Photo: AP

In the course of four days in August 2020, Kim raised the not-insubstantial sum needed to pay for Hong’s star, then took on the process of submitting an application. On the GoFundMe page, the Hawaii Five-0 actor wrote that Hong “epitomises the term ‘working actor,’ and that’s not even taking into account all he’s done to help further representation for actors of colour.”

(In 1965 Hong was a co-founder of East West Players, the first theater in the US committed to “raising the visibility of the Asian American experience,” according to the group’s website. At one point, Kim said, 70% of Asian American and Pacific Islander actors had ties to the group, now based in Little Tokyo.)

Kim noted that AAPI performers make up less than 1% of the names represented among the stars on Hollywood Boulevard and the streets nearby.

“Though that number is entirely too low,” Kim said, “it does underscore the fact that we need to celebrate every single one of us who has been fortunate enough to be recognised, and that includes the other three AAPI [performers] who are being inducted this year. So let’s give it up for Ming-Na Wen, Jason Momoa and (Black Eyed Peas founding member) apl.de.ap.”

But Kim noted that no one had “blazed a trail” like Hong had. “Thank you, James, for your body of work, your quality of work and your strength of character,” he said. In the course of four days in August 2020, Daniel Dae Kim (left) raised the not-insubstantial sum needed to pay for Hong’s star, then took on the process of submitting an application. Photo: Reuters

The actor then cracked a few jokes about Hong’s habit of emailing in all caps, saying it was hard not to feel like Hong was yelling at you even when he was saying the nicest things. But he urged Hong to hear his next words as if they were in all-caps, and bolded and italicized for good measure.

“YOU ARE TRULY DESERVING OF THE HONOUR YOU ARE ABOUT TO RECEIVE,” Kim said calmly, “AND YOU MAKE US ALL SO VERY, VERY PROUD.”

“I want to give a shout-out to DDK for your incredible advocacy on behalf of James Hong,” Curtis said earlier in the ceremony when she took the stage to help introduce Hong.

“He’s a passionate performer. He’s a hilarious presence on set … But I also think we share a commitment to ambition, to hustle and flow,” she said of her co-star, adding later that Hong had created a path for others to follow in his footsteps.

Also, Curtis said, “It’s about f— time that we are here honoring James Hong with a star on the Hollywood Walk Of Fame.”

The assembled crowd roared its approval.

Hong’s career started in the early 1950s, and he has referred to himself as “probably the only living guy that has worked with Groucho Marx!” He shared the screen with Clark Gable as well, as a Chinese policeman in 1955’s Soldier Of Fortune. His longevity has resulted in credits on 469 TV shows, 149 feature films, 32 short films and 22 video games, according to the Hollywood Chamber of Commerce.

Other notable credits include Chinatown, Blade Runner, Seinfeld, Friends, the Kung Fu Panda movies and TV shows, the Hawaii Five-0 reboot and the upcoming films Gremlins: Secrets Of The Mogwai and Patsy Lee & The Keepers of Of The Five Kingdoms.

How do genomes evolve between species? Team explores the key role of 3D structure in male germ cells

How do genomes evolve between species? Team explores the key role of 3D structure in…

Researchers Reveal the Origin Story for Carbon-12, a…

This website uses cookies to improve your experience. We'll assume you're ok with this, but you can opt-out if you wish. AcceptRead More